The team’s been hard at work on a variety of projects since we released the Rugged Sentinel update in December, and I thought you might like a general development status update. 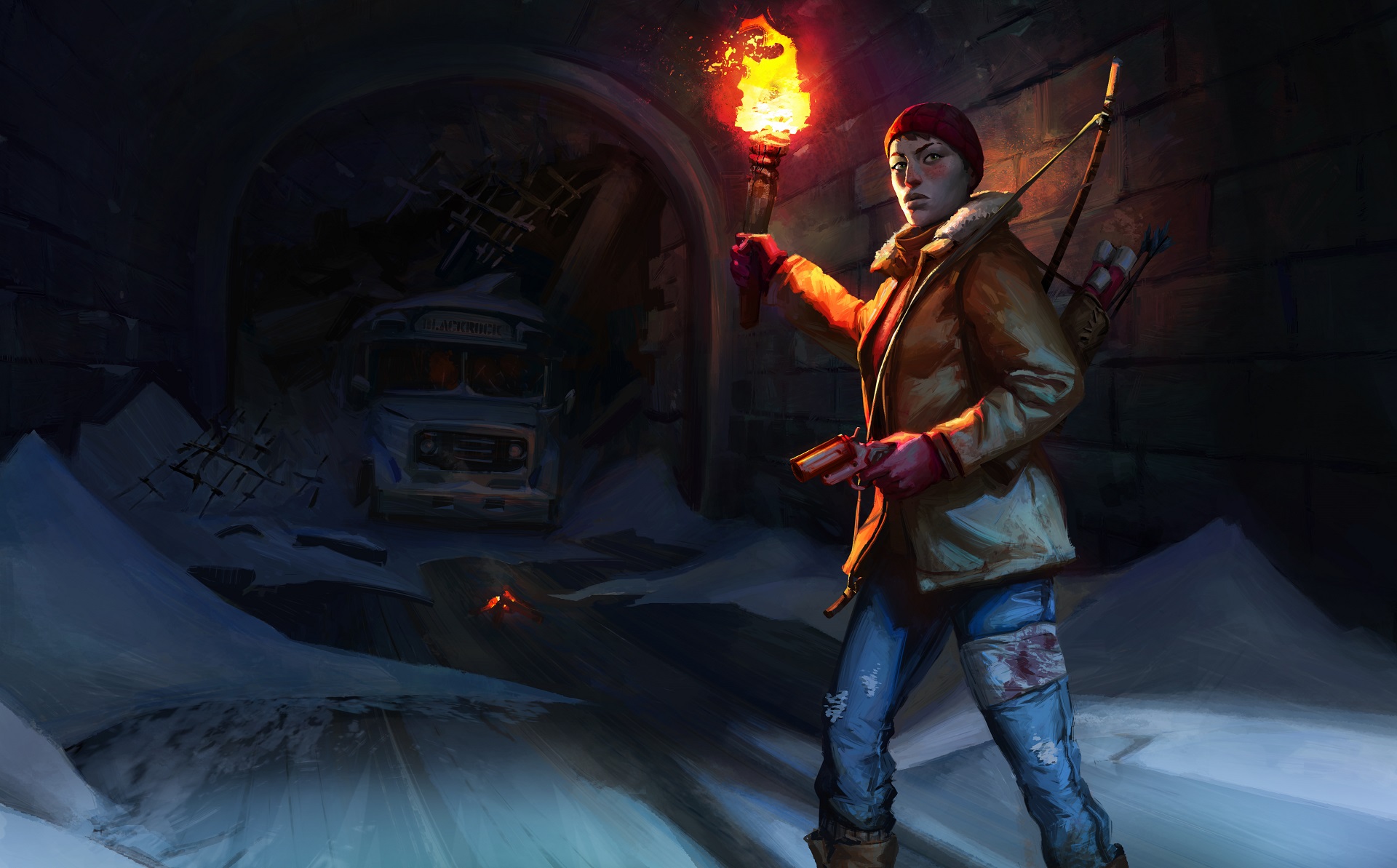 The main thing that has been occupying our time is work on Episode Three, but perhaps more importantly, a lot of reworking of Episode One and Two, in anticipation of Episode Three.

As you know from some of my previous developer diaries, there were several consistent pieces of negative feedback in user and critic reviews, around the forced linearity of our mission structure (as compared to the openness of Survival Mode), the lack of fully voiced dialogue sequences (outside of cinematics), some glitches in the Bear Hunt mission, and issues with the opening tutorial.

In terms of the openness of our mission structure — it was always our intention that things would open up and become less linear in Episode Three, and beyond, but after considering the feedback about Episodes One and Two, I felt that making the player go through 15-20 hours of fairly linear missions so that they could get to Episode Three’s more open structure, was asking too much of them. So, one of the things we’ve done is go back to the Episode One and Two mission structures and work on opening them up, so that most missions can be done in any order, and some missions — like Jeremiah’s Survival School — will become optional.

Since our cinematics in Episodes One and Two depend on knowing what order the player is progressing through the game, opening up the mission structure means the cinematics are too restrictive for the player’s experience of the game’s narrative. Therefore, we’ve had to come up with a new way to present those moments to the player — and that means shifting most of the dialogue content into a first-person dialogue mode. We’ll lose out on some of the cinematic cameras and lighting we used in Episodes One and Two, but this new presentation style will give us enormous flexibility in how we present missions and story content in Episode Three and beyond, so it’s the right thing for the game as a whole. This approach also means we can put all the Trust and secondary dialogue threads into the same presentation style, which will make the overall experience of interacting with characters in the world feel a lot more consistent, as well as giving us a much more flexible system to support our mission goals in Episode Three, and beyond.

WIP videos showing experiments with “look ats” which allow NPCs to react to the player’s presence and reposition themselves to face the player during first-person conversations.

This is a ton of rework of Episode One and Two, but we believe it’s important that players have a smooth-flowing experience between the episodes, and that it doesn’t feel like Episodes One and Two feel like they are from a different game. It’s also helping us prove out the improved direction for Episode Three content, and solidify our game structure and foundation for Episodes Four and Five as well.

We’re also doing some rework on the opening sections of the game — not just revising the Survival Bowl “tutorial”, but adding some new narrative content to set up the story a bit better, so we hope that with all these improvements, you’ll consider replaying Episodes One and Two before heading in to Episode Three.

In terms of Episode Three itself — this more open mission structure and new approach to dialogue and story presentation allows us to present an experience that’s more familiar to the Survival Mode experience. The structure is still very narrative-driven — you meet NPCs in the world, they each have their own story, and you can decide whether to engage in that story, or not. You can, generally, approach it in any order, apart from a few places where we have to be a bit more heavy-handed about linearity for the sake of storytelling. In Episode Three you play as Astrid, so you’ll get to experience the post-crash events from her point of view. In terms of size and play time — it’s too early to comment on the latter, but the size of world you’ll play in is roughly the same size as Episode Two, and a large part of the Episode Three world will be entirely new for the game.

I’m sure you’d all like to get an update on when we expect to launch Episode Three. At the moment, I don’t have a date to give you. Hopefully the above gives you a sense of how much work we’re putting in to getting it right. We see our Episode Three launch as an opportunity to “re-launch” our Episodes One and Two as well, so this means it’s going to take some extra time. We’ll keep you posted on progress, while also doing our best to avoid spoilers.

As some of you may know, we use a foundation of technology — an “engine” — called Unity, to make The Long Dark. We’ve just completed a massive overhaul of our core engine technology by incorporating an updated version of Unity, which provides several new features that are critical to our work on Episode Three and beyond. Similarly, we use an audio engine called Wwise, which we’ve also just recently updated to get the latest version. This is what we’d consider “core tech”, and it’s fundamental to the work we do in creating the game, but these major overhauls can be quite disruptive to our development.

So, in order to do some testing and insulate you as much as possible from these changes, we’re releasing an updated version of The Long Dark to our test branch in Steam. This new version will be running on the latest version of Unity, and will also be using the latest version of Wwise, and beyond that, it has about 200 bug fixes in it, including (finally!) a proper fix for the Faithful Cartographer achievement (a fix which will carry over to the Main game if you unlock it in the Test Branch). We’re hopeful that some of you will jump into the Test Branch and check out some of these fixes, as well as help us identify any issues you encounter due to the new version of Unity — for example, any crashes, compatibility issues, or performance issues (unexpected slowness or hitching, for example). Once we’ve managed to get some data from the test branch, and we feel confident the new version is safe, we’ll push it into the Main Branch as a hotfix that everyone can get.

Besides that, we’re working on some new content and features for our next Survival Mode update. It’s a bit early to share too much information about that, but one of the things we’re building for it is a new region. This region will use a new workflow and pipeline we’re testing internally, a new approach to region creation that we hope will allow us to create areas with a lot more interesting variety, and to build them much more quickly, so that we can release new regions more frequently in the future. We’re also working on some new kinds of environmental obstacles that we hope to use in future region work. We’ll share some more details about that as the region firms up.

Workflow improvements for region building, allowing us to iterate our terrain design and beautify much more quickly.

“Buffer Memories”: The aurora reveals secrets hidden within the depths of otherwise dead computers, relics of the world before “the long dark”. Could this make it into the next update?

We’ve been doing some work on improving the presentation of characters in the game — not just NPCs, but also the player. One of the things we’ve been wanting to get in the game for a while, is a better representation of the clothing items you’ve selected for your character. Our first approach to that has been to add things like mittens and sleeves to the first-person hands. But, we’ve been exploring with taking this even further by creating a full-body simulation. If we can pull this off, it would allow us to reflect not just choices about what you’re wearing on your hands and arms, but what you’re wearing on your entire body. It would also give us a good foundation for improving your sense of presence in the world as a whole — we could use more of the body to communicate your state in the world, animated interactions as you deal with injuries, moving over obstacles, using legs and kicking in the struggles, etc. It’s a big change and will require a lot of work — and frankly, we’re not 100% sure we can pull it off — but we’re working on it and we’ll see how far we can push it. I don’t want you to expect to see this in the game any time soon — this full-body presence will not be in the next update — and we don’t currently have an ETA on when we think the work will be complete. We’ll share more information about this feature as our experimentation continues.

So, that’s an update on some of the work the team’s been doing “behind the scenes”. If you’re interested in participating in the Test Branch, please look for information at www.hinterlandforums.com or in the Test Branch subforums on Steam. Please keep in mind that the Test Branch is for Steam-users only. The Test Branch update should go live within the next 24 hours! You can also follow us on social media, or sign up to our mailing list, to be notified of additional updates.

Thanks for reading! See you in the Quiet Apocalypse.