The team’s been hard at work since the holidays, which we used to recover from finaling the massive December “Redux” release, and it’s time to update you on some of the things we’ve been doing in the meantime. 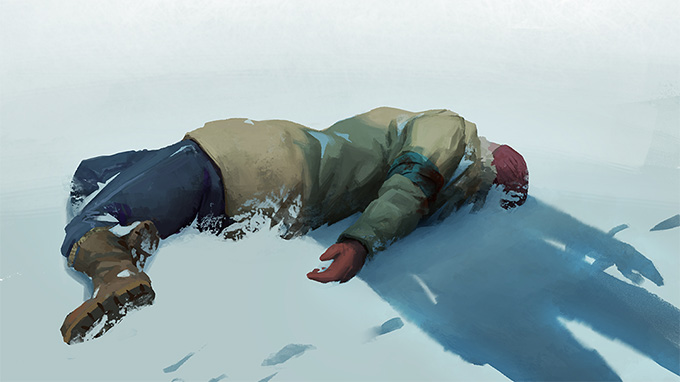 The team’s been working hard on Episode Three this year. We’d started work on it in 2018 and then put it aside to finish up Redux and work through all the tech and pipeline improvements we wanted to use for the remaining Episodes of WINTERMUTE. One of the first things we did after coming back from the holidays was re-evaluate our plans for Episode Three scope based on the lessons we’d learned from building and shipping Redux.

A key lesson there was the importance of having enough gameplay and narrative content to “fill the space” of the game, to avoid the feeling of senseless backtracking or the world just feeling too empty, as it sometimes did in the 2017 Episode One and Two release. Building Redux provided a fresh perspective on how to better balance our narrative and survival experiences, as well as how to better write for narrative flow in our open-world survival experience. These key learnings let us review our plans for Episode Three to ensure we would hopefully avoid making some of the same mistakes we’d made in the original 2017 releases, which we weren’t super happy with (and nor were many of you). Based on how we feel Redux turned out, and how you also seem to feel about the improvements, we’re confident we’re on a much stronger path now.

Building Redux also showed us that the “ideal length” for a WINTERMUTE episode is about 5-7 hours. This gives us enough time to present a few interesting story threads, some compelling open-world survival gameplay, and enough narrative momentum to keep the story moving. It’s also an amount of content that feels substantial — these aren’t throw-away one or two-hour experiences — but they are compact enough that you can finish them in a weekend if you like.

In our original planning, we had considered building the episode around three major story “hubs”, each in a different region, but that episode would have ended up being larger than Episodes One and Two combined, and amount of content that just isn’t sustainable for our team size. Just the testing on an episode that big would be a hugely daunting task, nevermind populating it with enough interesting narrative and mission content to “fill the space”. The Redux knowledge has helped us focus Episode Three down to a tighter experience that takes place in a single region. 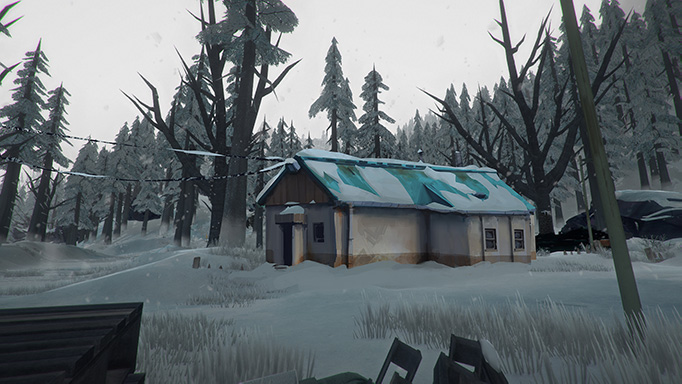 Therefore, Episode Three is the story of Astrid’s survival after escaping Milton, and takes place entirely in Pleasant Valley. As you probably know, Pleasant Valley is a *huge* region, with a lot of scope for interesting environments and some great story moments. We’ve been updating the region to freshen it up for the story, while adding some new landmarks and locations that are introduced in Episode Three. I’m really excited about how it’s all coming together, particularly in how true to Astrid’s character and background the episode is.

As you know, hitting publicly announced release dates has never been our strong suit.

As an independent studio without a huge marketing machine behind us, we count on our relationship with our community to be positive so that you’ll help us spread the word about the work we’re doing. We know we harm this relationship when we promise to deliver things to you and then, for whatever reason, they fail to happen.

Unfortunately, project planning and game development as a whole is not an exact science, and while we are ready to work really hard to hit our goals, I’m not willing to crunch my team to do so. In order to be more fair to the community, and also more fair to the development team, I think the best approach for us is to refrain from offering any more public release dates.

So, moving forward, we won’t publish release dates around any of our content, whether that be full Episodes or Survival Mode updates. We’ll keep working towards internal deadlines, of course, but we won’t share news on when we plan to ship updates until those updates are essentially finished. That way, when you hear a release date from us, you know it will happen.

One of the things we’ve been working towards this year, with the development team, is hiring enough people with the right skills to be able to create two separate teams — one to focus on Survival, and the other to focus on Story. We’ve made some great progress towards that goal and we’re getting very close to having all the people we need to accomplish that. Once we’re there, it’ll become easier for us to make consistent progress in both areas of the game, so that we can ensure a more steady supply of free Survival updates, as well as ensuring the Episodes get the resources they need. We still have a few positions to hire for to have full redundancy across both teams, but I’m hopeful we’ll get there within the next few months. If you know any great developers with experience crafting memorable and award-winning interactive experiences, please send them to our careers page!

Last year, we put a ton of effort into Redux and solidifying our foundation for the future Episodes, so this year we’re working to get back on track with producing more frequent Survival Mode updates. To that end, we’re working on a bunch of new features and content for the 2019 Survival releases. As per my earlier point about release dates, we won’t be sharing any tentative release windows for the next Survival release, but I will say that we’ve already done a fair bit of work on the new systems and content that will comprise the core of the next free update. 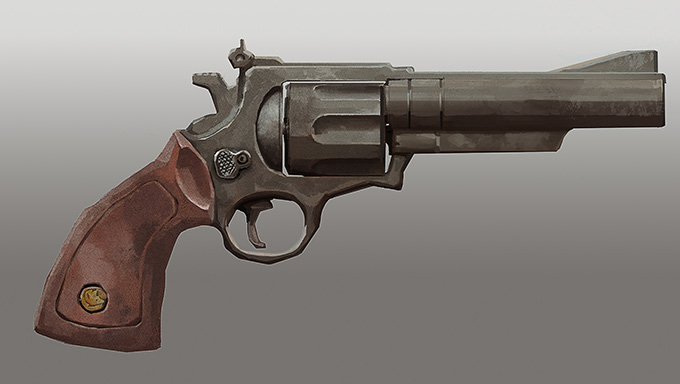 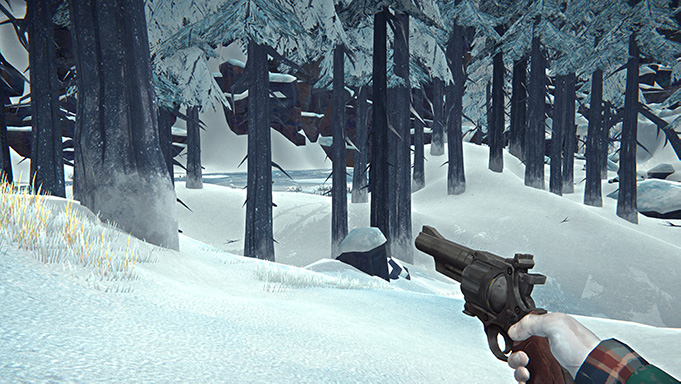 A few things we’re working on for the next Survival update include:

•  Adding the Revolver to Survival Mode.
•  Overhaul of the aiming mechanics for the Rifle, Bow, etc., to do a better job of integrating.
•  Fatigue and the breathing cycle, and making aiming less frustrating.
•  Adding a new Food item.
•  Adding a new Clothing item.
•  Fixing the Sprains system.

One feature I can confidently say *will not* be added in the next Survival update is the Bear Spear. This has turned out to be much more challenging to integrate well into the core Survival experience, so we’re taking a bit more time with it to make sure it’s a solid and promising addition to the Survival toolbox. It will eventually make its way into Survival mode, but it won’t be ready for the next update. And speaking of the Spear, we know that some of you [SPOILERS!] have been finding the Spear gameplay in Episode Two to be quite frustrating, particularly the last section in the Bear Cave, so we’re working on improving that. We’re also hard at work on a new Survival region, but that won’t be ready until (most likely) the update *after* the next one.

As you know we always like to keep a few surprises in our back pocket, but everything will be outlined in detail in the traditional Update Video we launch on update day. If you aren’t already doing so, it’s not a bad idea to subscribe to the Hinterland YouTube channel so you get notified when the update video goes live. 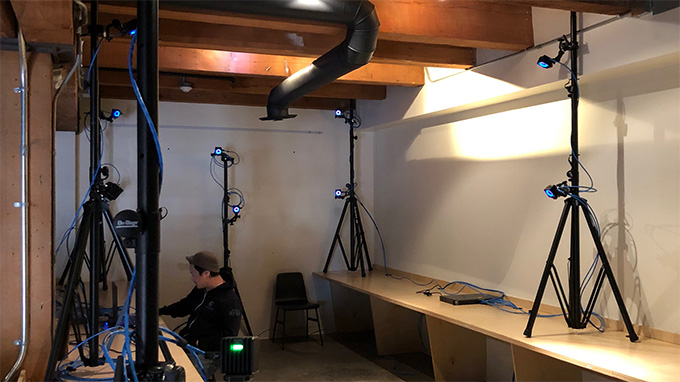 In a previous dev diary I mentioned that we’d been able to get our hands on the motion-capture gear from Capcom Vancouver’s now closed dev studio. We’ve been using the equipment and we thought you might like to catch a glimpse of the current set-up; this image is from the camera test we did to check out 18 of the 36 cameras. Unfortunately, we don’t have enough space in our current studio to set up all the cameras, but we’re looking for some overflow space so that we can set up all 36. In the short term, we’re going to remove the built-in desks and set up the gear in-house so that the animation team can very quickly and easily iterate on narrative scenes or gameplay animation in support of our Survival and Story goals. The animators whipped up this simple little animation to show you how well it works — all told this took about an hour or so to shoot and integrate. It’s only a quick test and obviously not something we’d ever ship, but it’s fun as a proof of concept and, let’s face it, Jeremiah has some sweet moves worth sharing.

We get a lot of questions about when The Long Dark will be brought to the Nintendo Switch. As you may know, we spent some time last year trying to get the game up and running on Switch devkits and ran into a lot of performance issues. 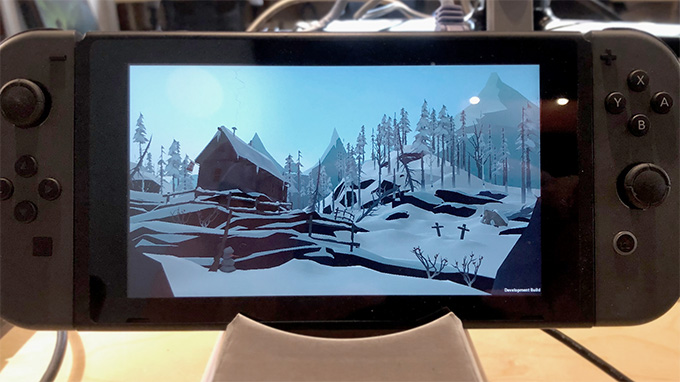 The latest version of Unity — which we’ll be rolling out as part of our next Survival update — does offer some performance improvements (which should also make the Xbox and PlayStation versions of the game run more smoothly), but we still don’t find the Switch performance to be at an acceptable level yet. We’re going to keep working on it alongside our other priorities, but I want to set reasonable expectations around this — not every game can run well on the Switch, and if we’re not able to get The Long Dark running at a level of performance and visual quality that I’m happy with, we won’t be shipping it. All that said, I’m still hopeful that we can find solutions to the current issues, and we think The Long Dark would be really compelling on this portable platform, so we’re not giving up!

Thanks for reading this update, and if you’d like to share your thoughts about the contents of this developer diary, I hope you’ll take a few seconds to join the official The Long Dark community, as well as following us on Twitter. If you haven’t already done so, and you’d like to be kept up to date on project announcements outside of general development updates — for example, sale events, new merchandise, and information about the studio — please consider signing up for the Hinterland Newsletter. And if you’re interested in more regular, bite-sized responses to community questions, make sure to check out the (almost) weekly Milton Mailbag.

See you where we see you!