The team’s hard at work on finalizing the (still un-named) December update and with a bunch of new players joining us thanks to the Steam Autumn Sale, it seems like a good time to preview a few of the treats we have in store.

First off, you’re all waiting to hear more information about the Moose. The model, animation, audio, and core behaviour is all finished. We’ve populated the world with Moose — it’s a pretty rare animal so don’t expect it to be easy to find — and we’re now just tuning the AI behaviour and some of the Moose’s unique capabilities to make sure it feels balanced. 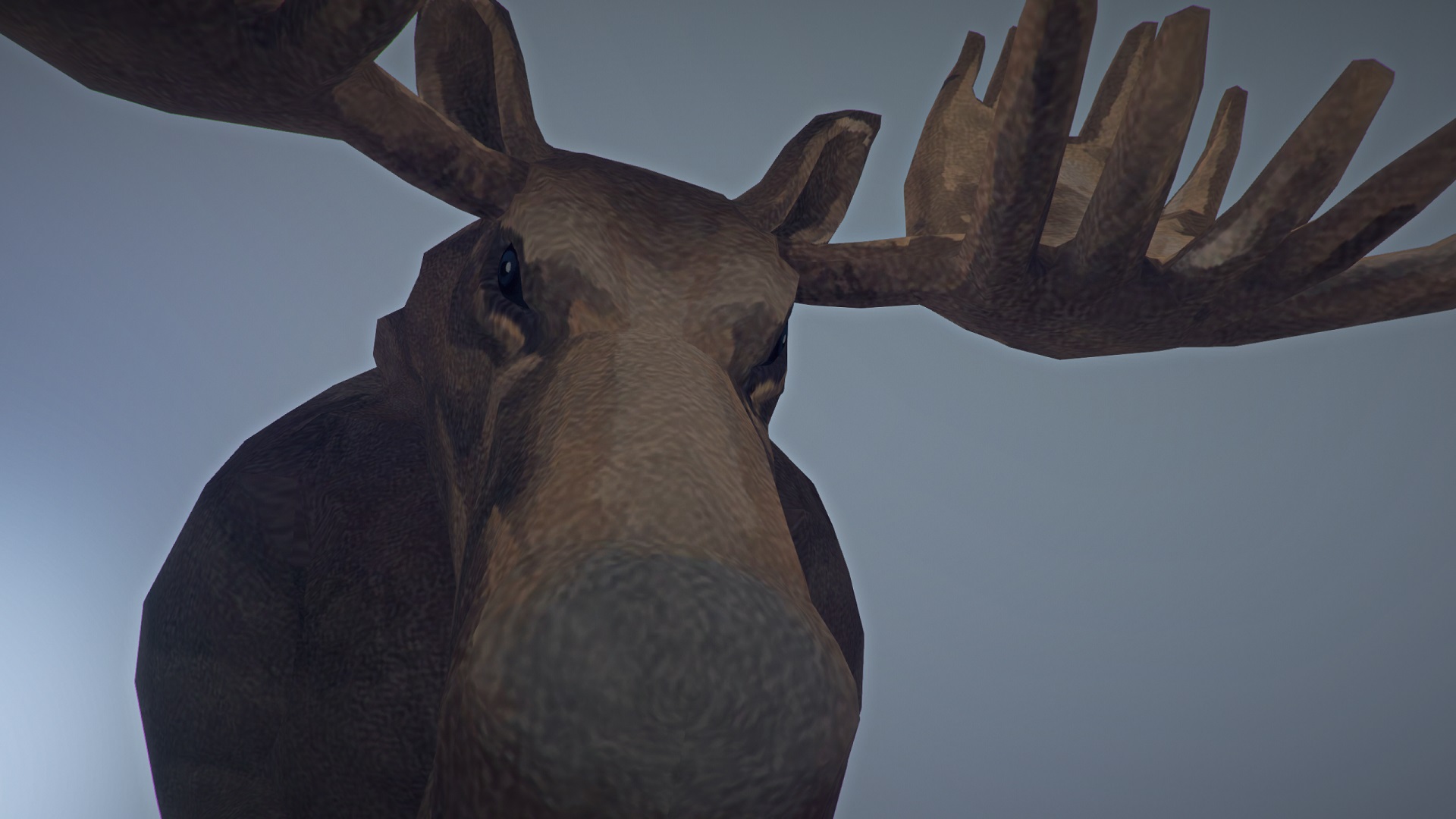 This guy does not look happy to see you.

Keep your eyes for these scratches on the tree bark; this might indicate Moose are in the area!

We have some other fun updates to Survival Mode coming in December, but I’d like to talk about a couple of things we’re doing for Story Mode in the December update.

A common piece of feedback we received after launching WINTERMUTE was that the first two episodes were far too easy for our experienced Survival Mode players. This made the introductory segments feel slow-paced and too “tutorial-y”, and yet these sames parts could be quite punishing for players who didn’t know anything about the game. It was challenging to balance Episode One for brand new players, and also players who had put 1000s of hours into the Sandbox, and we were reluctant to add the notion of “difficulty modes” for the Story experience, because we wanted everyone to share that experience the same way. Also, having multiple “difficulties” would create a ton of additional tuning and bug-fixing overhead for us while we were trying to finalize our first two Episodes, and we were nervous about taking that on in addition to all the other finaling tasks on our plates.

However, we really want everyone who plays WINTERMUTE — new or veteran — to have a great experience with this narrative mode, and we were sad to hear so many veteran survivors just didn’t enjoy Episode One as much due to the level of challenge, so in December we’ll be rolling out three new Experience Modes, specifically for WINTERMUTE. These loosely map to “difficulty”, and are similar to how we tune our Survival Mode Experiences, but to be clear, these are specifically tuned for WINTERMUTE (i.e. they are different from the Survival Mode experiences of Pilgrim, Voyageur, etc.).

Three new Experiences should provide a good range of choices for WINTERMUTE players, from the Greenest to the most Hardened survivors.

This should give both the newest, and most veteran player of The Long Dark, a little more control over the type of experience they have when playing WINTERMUTE. (Please note the new Experience Modes for WINTERMUTE will only work on games started *after* the December update.)

Another issue we encountered, post-launch, were challenges around our implementation of the Save system for WINTERMUTE. Unlike Survival Mode, which is Permadeath (i.e. once you die, we delete your game), WINTERMUTE has a two-slot save system. Saves were triggered using the Bedroll or resting in a Bed (as in Survival Mode), and also by Autosave (as in Survival Mode), but we found that this introduced too many restrictions for players, discouraged experimentation, and also often resulted in players getting “stuck” between two bad saves, sometimes in an irrecoverable situation. This was terrible for some people, and we feel really bad about it.

So with the December update, we’re rolling out a completely overhauled Save System for WINTERMUTE. You can now save pretty much anywhere, with between 20-25 save slots (depending on platform) shared between WINTERMUTE, Survival Mode, and Challenges. We also let you reload from an Autosave, or a Checkpoint (these are triggered by mission progress), so between those systems, we feel that players will have LOTS of choices in terms of how often or how rarely they want to save, and will have a much better chance to recover from a bad situation, or create their own “branches” when they want to experiment with different things in a given Episode.

For anyone that already has Saves for WINTERMUTE, this revision doesn’t change anything. You’ll find your existing saves in the list, and you should be able to create new saves using the revised system.

And to be 100% clear — WE HAVE NOT CHANGED THE WAY SAVES WORK IN SURVIVAL MODE (or the Challenges). Both are still permadeath experiences.

In addition to Milton being playable in Survival Mode in December (mentioned in our October Dev Blog), we have some other cool stuff we haven’t shared yet – we still want you to be surprised! — but hopefully this outline gives you a bit of a better idea of some of what you can look forward to in the December update.

Thanks for reading! We’re really excited to see how you like the December update, and to all the players who are joining us for the first time — Welcome to the Quiet Apocalypse!